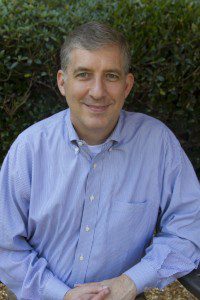 David Tolleson has served as the National Down Syndrome Congress’ Executive Director since May 2003. Before joining the NDSC, David held the position of COO of Southern Druggists, Inc. and also served three terms on the Roswell, Georgia City Council. In David’s spare time he likes to read, hike, and travel and enjoys spending time with his family.

Although David has spent his entire life as a resident of Georgia, as a young man he spent several months traveling through the South Pacific alone. David is a graduate of the University of Georgia where he earned a degree in Journalism. He spends Saturdays in the fall cheering on his Bulldogs, having been a season ticket holder since 1984. David and his wife, Kim, celebrated 30 years of marriage in 2018. They have known each other since meeting in 5th grade Sunday school class. David and Kim have 2 adult children, one of whom has autism. David considers his family his greatest blessing.

Since David’s arrival, the NDSC has seen tremendous growth. The NDSC Annual Convention – the largest of its kind in the world – now serves more than four times the number of self-advocates and siblings and nearly twice the number of overall attendees than when David joined the organization. Under his leadership, the NDSC has also seen significant growth in both its outreach to underserved communities and in its policy and advocacy work. But when asked about what he’s proudest, David notes NDSC’s reputation as a stable, collaborative, fiscally responsible force for good in the disability rights community. David enjoys working with NDSC’s terrific board, staff, volunteers and families and is excited about making a difference in the lives of men, women, and children with Down syndrome and their families.