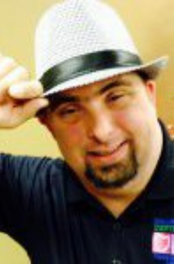 Chess is the Office/Social Media Assistant for the National Down Syndrome Congress. He assists with office duties such as building Family Care, Adult Sibling, and Advocacy Toolkits for Self-Advocates. Chess also writes the NDSC movie reviews.

Chess was born in 1983 in Macon, Georgia. He is the first of 4 children and is named for his two grandfathers, Thomas Clark and Chess Mitchell. After several moves throughout his childhood, Chess finally settled back in Georgia. For more than 10 years Chess has lived in his own apartment. Although he has had additional roommates along the way, Chess has lived with his best friend JP since he moved from his parents’ home.

Along with his position at the NDSC, Chess also works at Top Golf, where he has so many other great experiences and opportunities such as being a feature in a companywide video to showcase his talents and the company’s inclusive atmosphere.

Feb. 8 – NDAC Quarterly Call | Sign up to be an NDAC Member to receive the link!

Feb. 27 – Ages & Stages Webinar | T2: Using Behavioral Strategies that are at the Palm of your Hand with Dr. Solandy Forte