We were pleased to host the Office of Special Education Programs of the U.S. Department of Education (OSEP) at the NDSC Convention. The NDSC Policy Team set up a Town Hall for members of the National Down Syndrome Advocacy Coalition (NDAC) in which OSEP Director Valerie C. Williams discussed the role of OSEP, new monitoring and accountability systems, and how OSEP addresses states and local education agencies (LEAs) that are not complying with the requirements of the Individuals with Disabilities Education Act (IDEA). Moderated by NDSC Senior Policy Advisor Stephanie Smith Lee, this Town Hall meeting provided a chance for NDAC members to hear directly from OSEP leadership on issues impacting our loved ones with Down syndrome.

The NDSC Policy team also worked with OSEP to set up Listening Sessions at the Convention for parents of children aged birth – preschool, Kindergarten – 8th grade, and high school and beyond. Topics discussed included COVID-19 learning loss and compensatory education, inclusion, transition, and other implementation problems with the Individuals with Disabilities Education Act (IDEA). Thank you to the many families who shared information and concerns during the OSEP Listening Sessions. Director Williams and the OSEP staff were very appreciative of the opportunity to engage directly with families about what is happening in their state, and they will be taking this information back to Washington, DC to help them address various concerns. 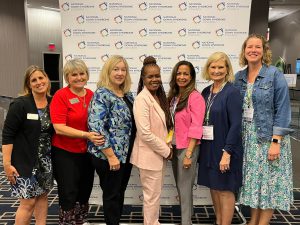 In addition to participation in the Convention by OSEP Director Valerie C. Williams and senior OSEP monitoring staff, representatives from two OSEP-funded technical assistance centers attended the Convention and gave various workshops on their resources available for families and schools.

The TIES Center, of which NDSC Senior Education Policy Advisor Ricki Sabia serves as parent liaison, presented at both the concurrent NDSC Educators’ Conference and the NDSC Convention. The TIES Center is the federal technical assistance center on inclusive practices and policies focusing on students with significant cognitive disabilities. TIES brings together recognized experts in inclusive education to provide evidence-based resources, tools, curricula, and reports so students with significant cognitive disabilities can learn in classrooms alongside their non-disabled peers. Of particular note is the newly developed TIES Curriculum “Creating Communities of Belonging” which we encourage you to share with your schools.

Also in attendance at the Convention was the Center on Positive Behavioral Intervention and Supports (PBIS) funded jointly by OSEP and the Office of Elementary and Secondary Education. The Center on PBIS supports schools, districts, and states to build systems capacity for implementing a multi-tiered approach to social, emotional, and behavioral support.

Taking a little detour from showcasing NDAC members to share about the 5th Annual NDSC Advocacy Training Boot Camp at the NDSC Convention. This year’s Boot Camp hosted approximately 100 attendees who heard from the NDSC Policy Team, individuals with Down syndrome, parents, professionals, and elected officials. The goal of boot camp is to give beginner advocates the tools and resources needed to advocate for policies that are good for people with Down syndrome and other intellectual disabilities. It is also an opportunity for networking with seasoned advocates.
For those who were unable to attend, the NDSC Policy Team would like to give access to the materials and presentations. The following presentations are housed on the NDSC Website Policy and Advocacy tab under Advocacy Trainings.

Louisiana State Senator Sharon Hewitt (R-LA) joined Louisiana Self-Advocate Hannah LaCour for a live interview.  Louisiana State Representative Royce Duplessis (D-LA) was unable to come in person, but he did record an interview with Self-Advocate Tony Piontek that was shared at Boot Camp. These elected officials had the same message as all of the other presenters: TELL YOUR STORY! Your story is important. Senator Hewitt went on to say that she could not be an expert on everything, so she needed constituents to come to her with issues and solutions. 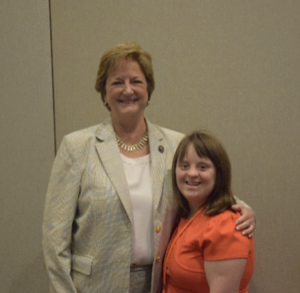 Other resources from Boot Camp that you can find under Training Resources on the Policy & Advocacy Tab include:

One of the many highlights from the NDSC Advocacy Training Boot Camp at the NDSC Convention was the collaboration with The Improvaneers. Under the direction of Ellen Snow, Co-Founder of Stand Up for Downs, self-advocates Craig Blackburn (LA), Daniel Chaplin (AL), Hannah LaCour (LA), Tony Piontek (LA), Jessie Smart (TN), and Stormie Zanfordino (MD) did a crash course on the Improvaneer Method. Through the use of Improv games and methods, these six self-advocates illustrated ways to effectively engage elected officials. They also had fun teaching some ineffective strategies, too. 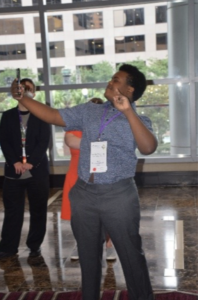 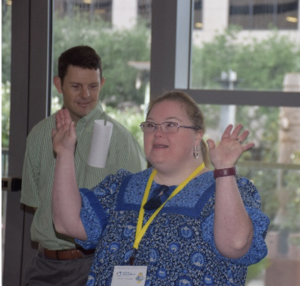 These self-advocates come from a variety of backgrounds. While some are seasoned advocates themselves, others are just starting their journey. One message is clear from all our self-advocates who participated in boot camp: WE HAVE IMPORTANT THINGS TO SAY. OUR VOICES ARE IMPORTANT! 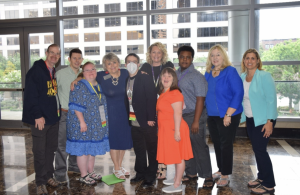 For the first time since the regulations implementing Section 504 of the Rehabilitation Act of 1973 were published 45 years ago, the U.S. Department of Education (ED) has announced plans to gather public input on those regulations in order to strengthen and protect the rights of students with disabilities. Section 504 prohibits discrimination on the basis of disability in public and private programs and activities that receive federal financial assistance, including schools and postsecondary institutions.

NDSC collaborated with members of the Consortium for Constituents with Disabilities (CCD) Education Task Force to develop public comments to ED with recommendations on how to improve these regulations; these recommendations are reflected in this letter. This K-12 Dive article describes the issue. NDSC is continuing to work with other organizations in making recommendations to the Department of Education.

College Fair at the Convention

The excitement was palpable at the NDSC Convention College Fair sponsored by the National Coordinating Center/Think College. Parents, siblings and prospective students gathered around the exhibitor tables to discuss college options with program representatives from around the country. A new feature this year was an “Ask the Experts” table with current students, graduates, and parents available to discuss what college is like and what to consider in choosing a college program. We wish to thank Think College for sponsoring the College Fair, exhibiting, and speaking at workshops, and thank all the program representatives who travelled to the convention and exhibited!

NDSC is pleased to share that the ABLE Age Adjustment Act was recently included in a retirement tax package that passed the Senate Finance Committee unanimously. The ABLE Age Adjustment Act would raise the age of onset of a disability for qualifying for an ABLE account from age 26 to age 46. According to the National Disability Institute, this change will enable six million additional people with disabilities to open ABLE accounts to save for long term and short-term expenses without losing federal benefits. This additional influx of potential beneficiaries will improve ABLE programs nationwide.

NDSC was one of the leading disability organizations to advocate for the original Stephen Beck, Jr. Achieving a Better Life Experience (ABLE) (P.L. 113-295) and has been strongly advocating for the passage of the ABLE Age Adjustment Act since it was first introduced in 2014. Now that the ABLE Age Adjustment Act has cleared this significant hurdle in the Senate, we are optimistic that the bill will finally pass this Congress.  We will keep you posted on its progress. For more information about ABLE accounts, please visit the ABLE National Resource Center.

NDSC is advocating for passage of the IDEA Full Funding Act (S.3213/ H.R. 5984). This bill would require regular increases in IDEA spending, putting it on a 10-year glidepath to “full funding.” This bill would infuse billions of dollars into state and local district budgets for the purpose of serving students with disabilities under IDEA. This bill has bipartisan support in both the House and Senate.

The Individuals with Disabilities Education Act (IDEA), originally passed in 1975, guarantees all students with disabilities the right to a free and appropriate public education in the least restrictive environment. Along with the rights to students and families conferred by IDEA, Congress made a promise to pay 40% of the extra cost of providing special education and related services to students with disabilities. Unfortunately, Congress has never held up its end of the bargain, typically only funding IDEA between 13-16% leaving the rest to be funded by the states and local districts. This has resulted in major IDEA implementation problems, where students with disabilities are often denied services because of budget shortfalls, even though cost is not supposed to be a factor under the law.  There is also inadequate funding for teacher preparation and training. Despite some very strong provisions in the IDEA law itself, lack of funding has led to widespread implementation problems around the country. The IDEA Full Funding Act would address this funding shortfall.

Please help us to advocate for this bill by responding to the recent NDSC Action Alert – Take Action & Stay Informed | National Down Syndrome Congress (ndsccenter.org)

The U.S. Department of Education (Department) has issued its 2022 determinations regarding whether your state has met the requirements of IDEA. To see the states in each category, click on “expand all.” The reports that underline these determinations will be posted on the Department’s website sometime in July. It is important to recognize that the compliance indicators used to make these determinations focus solely on all students with disabilities (not individual disability subgroups like intellectual disability) and the results indicators ignore students who take alternate assessments completely. NDSC has been advocating for changes to this system so that states are held accountable under IDEA for all groups of students with disabilities. The Advocacy Institute also has a blog on these determinations.

The U.S. Department of Education launched the National Parents and Families Engagement Council to facilitate strong and effective relationships between schools and parents, families, and caregivers.  The Council consists of representatives from national organizations that will work with the agency to identify constructive ways to help families engage at the local level. The organization that works with students with disabilities on this council is COPAA (Council of Parent Attorneys and Advocates). The council is described as ”a channel for parents and families to participate in their children’s education, by helping them understand the rights they have, create a feedback loop with schools to shape how American Rescue Plan (ARP) funding is deployed to meet students’ needs, and identify summer learning and enrichment opportunities for children within their communities.”

The Department says that the council will meet to discuss how children are recovering from the impacts of the pandemic; the different ways that schools are providing academic, mental health, and social and emotional support; and how they might best engage with schools.  In the coming months, the council will hold local listening sessions with parents, families, educators, and other school community members to better understand the needs of students as they start the 2022-23 school year.