The National Down Syndrome Congress (NDSC) is very concerned by the recent ruling issued by a federal judge in Texas in the case Texas v. United States, which struck down the Affordable Care Act (ACA) as unconstitutional. The Texas court ruled that the ACA’s individual mandate is unconstitutional, and because the mandate cannot be separated from the rest of the law, the rest of the ACA is also invalid. (Legal wonks can read the actual opinion HERE; or a summary HERE)

In striking down the ACA, the Texas judge reasoned that in 2012, the Supreme Court upheld the coverage mandate because of the Congress’s power to tax. In the tax reform package passed by Congress last year known as the Tax Cuts and Jobs Act of 2017, the tax penalty for failing to comply with the individual mandate to maintain coverage was removed. As a result of this removal, the Texas court reasoned that the mandate is no longer a “tax” so the legal underpinning for the ACA has been eliminated. Even more controversial in his ruling was his determination that the mandate is “essential” to the rest of the law, so without the mandate, the entire law becomes invalid. This includes the provisions protecting coverage for people with pre-existing conditions and the ability for young people to stay on a parent’s health plan until age 26.

This lawsuit was brought in February 2018 by the states of Texas and Wisconsin and joined by the states of Alabama, Arkansas, Arizona, Florida, Georgia, Indiana, Kansas, Louisiana, Maine, Mississippi, Missouri, Nebraska, North Dakota, South Carolina, South Dakota, Tennessee, Utah, and West Virginia. In an unusual move, the US Department of Justice (DOJ) filed a statement of support for these states against the existing law (You can read then-Attorney General Jeff Sessions’ letter to Congress explaining the DOJ’s filing HERE). Because the federal government refused to defend its own law, the states of California, Connecticut, Delaware, Hawaii, Illinois, Kentucky, Massachusetts, Minnesota, New Jersey, New York, North Carolina, Oregon, Rhode Island, Vermont, Virginia, Washington and the District of Columbia have intervened in the lawsuit to defend the ACA. They argue that if Congress intended to repeal the entire law, it would have done so. Instead, Congress limited its repeal to the individual mandate tax provisions.

The ruling is certain to be appealed to the Fifth Circuit and it is ultimately expected to go to the US Supreme Court. Enactment of the Texas ruling is currently on hold pending the appeal, which means that the Affordable Care Act is still the law of the land. Administrator for the Center the Medicare & Medicaid Services Seema Verma has assured that public on Twitter that “There will be no impact to current coverage or coverage in a 2019 plan.” This may allay fears of losing coverage in the immediate future but still puts the future health care of millions of people in an uncertain position. NDSC is committed to working to preserve access to affordable health insurance for people with Down syndrome and their families, which is so critical for community integration and living life to the fullest extent possible.

Lastweek, the US House of Representatives passed the Improving Medicaid Programs and Opportunities for Eligible Beneficiaries (IMPROVE) Act (H.R. 7217), a broader piece of legislation from the House Energy & Commerce committee. This includes the three-month renewal of the Money Follows the Person Program (“MFP”).  By renewing MFP for three months, the IMPROVE Act would give the MFP program a needed bridge into the new Congress in 2019, when we can advocate for a longer renewal. The bill moved to the Senate and, thanks to your advocacy, seems to have widespread support.

Reauthorization of the MFP program has been the subject of our previous Action Alerts calling for the passage of the EMPOWER Care Act (H.R. 5306/S. 2277). Through the EMPOWER Care Act, we sought to reauthorize the MFP Program for multiple years since it has expired and states are running out of funding to help people transition from institutions to living in the community. MFP is a Medicaid program that has helped over 85,000 people with disabilities and seniors move out of nursing home or institutions and back into their communities. First authorized in the Deficit Reduction Act of 2005 with strong bipartisan support, the MFP Demonstration program was designed to assist states with (1) supporting Medicaid enrollees who want to transition from institutional settings to community-based settings; and (2) developing infrastructure to promote and enhance access to Home and Community Based Services (HCBS). HCBS provides critical supports to people with disabilities to enhance their ability to be included and integrated into their communities instead of receiving care in restrictive, institutional settings. Each state can decide how to use the MFP funds, which they have used to expand or enhance HCBS programs, reduce waiting lists and fund housing supports. (For more information, please see HERE).

There is now a second possible path for MFP to be renewed. Late last night, the Senate passed a continuing resolution (CR) was to fund the government.  A CR is a temporary funding measure that Congress can use to fund the federal government for a limited amount of time. CRs are often used to avoid a government shutdown and give lawmakers more time to pass all of the appropriations bills that are needed to fund the federal government for an entire fiscal year. This CR includes a provision to renew MFP funding for three months, just like what is included in the IMPROVE Act.

At the time of publication of this e-newsletter, the CR had not yet passed the House but we expect a House vote very soon as the deadline for a government shutdown is looming. We are optimistic that the MFP program will be reauthorized for three months through either the passage of the IMPROVE Act or the CR. We will keep you updated and will need you to continue your advocacy on this issue next session when we will need to ask for a longer reauthorization of MFP.

NDSC has concerns about the revised “public charge” rule announced by the U.S. Department of Homeland Security on October 10, 2018 and believes that the expanded scope of the public charge rule is discriminatory to people with Down syndrome in that admission to the United States – including travel for a medical procedure or to the NDSC Convention – could be denied solely on the basis of having a child with Down syndrome or another disability. NDSC has submitted comments to the Department of Homeland Security to raise these concerns (See NDSC’s comments HERE). THANK YOU to the many advocates who answered our Action Alert and submitted your own personal comments to oppose this rule. For more information about the public charge issue, see HERE. We will keep you updated once the Department of Homeland Security has gone through the thousands of comments that were submitted and issues a final decision about the changes to the rule.

According to the Center for Medicare & Medicaid Services (CMS), there are 8.3 million people in this country who are “dually eligible” for both Medicare and Medicaid, many of whom are people with disabilities. (See HERE for an explanation of eligibility criteria). These Medicare recipients get their prescription drug benefits through Medicare Part D. Currently, Part D plans are required, with limited exceptions, to cover “all or substantially all” drugs in six classes and categories which include: (1) anticonvulsants (epilepsy); (2) antidepressants (mental health); (3) antineoplastics (cancer); (4) antipsychotics (mental health); (5) antiretrovirals (HIV/AIDS); and (6) immunosuppressants (transplants).  Many people with Down syndrome are dependent upon drugs in at least one of these protected classes to maintain good health and improve their quality of life.

On November 26, CMS released a proposed rule (view HERE) that will significantly impact the Part D program and the six protected classes.  While the proposed rule does not explicitly remove the current list of protected classes, CMS is looking to create significant exceptions which could lead to fewer protections and allow plans to create more limited drug formularies. As a result, patients may lose access to medications they are currently stable on as well as potentially more effective, breakthrough medications. HERE is an article that explains the potential pros and cons of the proposed rule. CMS is accepting comments on this proposed rule until January 25, 2019. NDSC is working in coalition with other disability and patient care groups to analyze this issue and we will continue to keep you updated.

On Tuesday, December 18, members of the NDSC Policy team and NDSC Board of Directors met with the new Director of the U.S. Office of Special Education Programs (OSEP), Laurie VanderPloeg, and other OSEP high-ranking staff. NDSC discussed the monitoring of IDEA implementation and providing technical assistance to the states to improve educational opportunities for students with Down syndrome in the Least Restrictive Environment. We also provided some recommendations regarding improving state Every Student Succeeds Act (ESSA) accountability. We shared our expertise and offered our team as a resource for future conversations on how education for individuals with Down syndrome and other intellectual disabilities can be improved. We were very appreciative of the time the OSEP Director and staff gave to us and look forward to continuing productive conversations in the future. Thank you to NDSC Board and Executive Committee Member Sean Smith for joining us in Washington, D.C.! 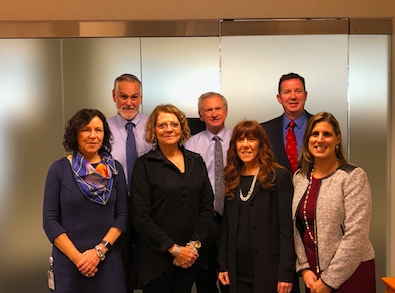 Submit YOUR Comments on How States are Held Accountable for IDEA by 12/21!

The U.S. Office of Special Education and Rehabilitative Services (OSERS) has announced that is it “rethinking” RDA, which is the system used to determine whether states are meeting the requirements of the Individuals with Disabilities Education Act (IDEA). They are asking for the public to submit input by sending an email to RethinkRDA@ed.gov. You can provide your own comments or send a comment saying you support the letter submitted to OSERS by NDSC. You can link to that letter HERE. The deadline for comments is December 21.

Assistant Secretary of Elementary and Secondary Education Brogan sent a letter to Chief State School Officers (e.g. state school Superintendents or Chancellors) about the requirements if states want to amend their ESSA accountability plans. This is especially likely to happen in states that just elected new Governors. Advocates need to be aware that the state must describe how it provided the public a reasonable opportunity to comment on the amended plan. Be on the lookout for opportunities to comment in your state. The letter to the states is HERE.

The TIES federally funded center, which focuses on inclusion for students with significant cognitive disabilities, released two publications for Inclusive Schools Week, which you can find HERE. One is a brief co-authored by Ricki Sabia, NDSC’s Senior Education Policy Advisor, who acts as a parent liaison to the TIES Center. The brief discusses 10 reasons to support inclusive school communities for ALL students. The other is a policy report on how states interpret the LRE clause in IDEA.

Want to See More of our Advocacy in Action?

Sign up to receive our Action Alerts! Receive timely, accurate information from the NDSC Policy & Advocacy Team and to magnify your voice. Signing up is free and takes less than one minute – simply provide your name, email, address and zip code. NDSC will not share your personal information and will use it for advocacy communication purposes only.

Become a member today, learn more HERE and submit a quick application.
If you like what you see, please consider making a donation to help us further our Policy Team goals.  Click here and put “Policy” in the Comments section.  Thank you!